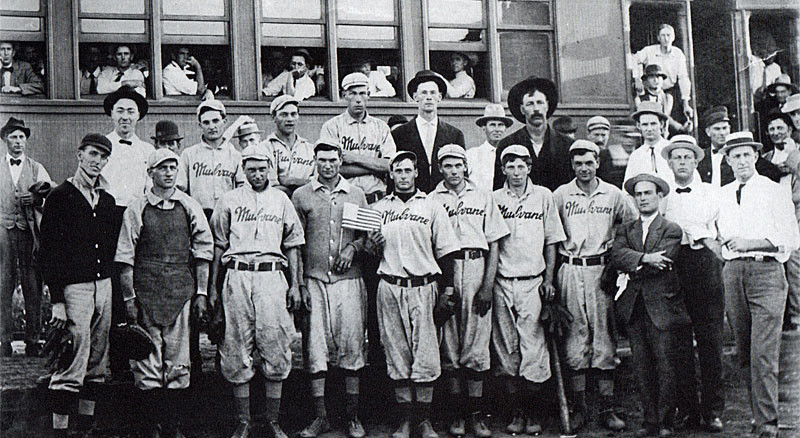 The 1911 Mulvane town team prepares to take the train to Clearwater for the championship game. 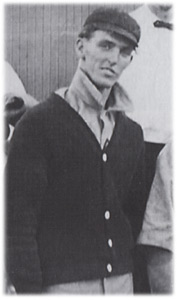 In the early 1900s, town baseball was a huge deal for many small towns in Kansas and they would travel from town to town for ballgames. Mulvane featured some great teams back in the day and one team in particular featured a pitcher named Carl Mays. This team was the 1911 Mulvane town team and they were involved with what the newspaper described as "Greatest amateur game ever played in Southern Kansas, nearly 2000 people saw the contest.". 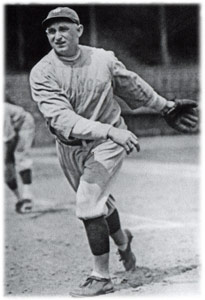 In August 2008, Mays was one of the 10 former players who began their careers before 1943 to be considered by the Veterans Committee for induction into the National Baseball Hall of Fame in 2009. He was named on only about 25 percent of the ballots, so he was not selected for induction.

On Saturday, September 2nd, 1911 the Mulvane town team traveled by train to Clearwater for the championship game and the Mulvane team came out ahead 8-6 to win the pennant. This game was attended by around 2,000 people and was such a big game that the innings scores were sent to Wichita where people stood around bulletin boards to watch the progress of the game. The records of that game doesn't show Carl Mays pitching on that day.

There may have been better ball games, but there has never been one played in this part of the country, where the interest was so intense as the one played in Clearwater Saturday. The game had been kept before the public for several days of the sporting writers of the Wichita papers, and hundreds of Wichita people motored to Clearwater to see the game while Cheney, Conway, Belle Plaine, Argonia, and other places sent great crowds. Between 80 and 100 motor cars were counted inside the ball grounds. It was the greatest crowd ever in Clearwater on any occasion.

Mulvane sent over a train load of rooters, more than 200 round trip tickets being sold here, besides the crowds that went in machine and carriages. It was the Editors day to stay at home and work, and we missed the fun at that end, but got into the game alright when the crowd came jubilating home. It was Mulvane’s day to do the hollering, and the 200 loyal fans from here stood off the rest in good shape until the ninth inning, when they were overwhelmed for a time, but came up shouting when the last man was out and Mulvane was two scores ahead.

Click here for the entire newspaper article and stats.

Note: Pictures courtesy of the Mulvane Historical Museum and the Library of Congress.