Baseball / Cats Advance Past Trinity in 4A State 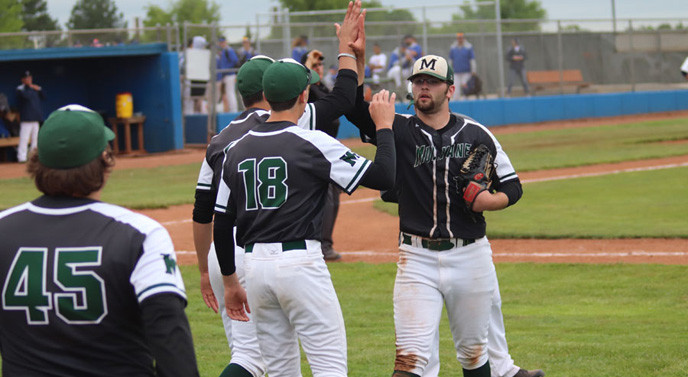 Is a Cinderella story brewing? It's a possibility as the #7 seed Mulvane Wildcats advances in the 4A State Playoffs after defeating the #2 seed Wichita Trinity, who finished their season with an 18-1 record. Mulvane and Trinity played in games 9 and 10 in the regular season and Trinity swept the Cats 3-6 and 4-9. The Wildcats rebounded in the second half of the season and have gone 8-3 after the Trinity losses including the regional championship after defeating top seeded Andale and Clay Center.


As cloudy skies threatening rain overhead, the Cats took the field for the 4A State opening round against Trinity on Thursday, May 23rd as the visiting team. The Cats and Trinity both went scoreless for 2 innings until Mulvane broke open the scoring in the top of the 3rd, scoring 3 runs as Senior Drew Ellis walked and stole second and third base. Freshman Mason Ellis also walked and stole second based and Freshman Hunter Seier grounded out to second, scoring Drew for an RBI. Junior Gage Gerlach reached 1st base on a short stop error and scored Mason for an RBI. Senior Nathan Klein singled through the left side and Junior Hunter Dye reached 1st on an error at second base and scored Gerlach (unearned).

Mulvane and Trinity would go scoreless until the 6th inning where the Cats poured on 4 more runs. Junior Trey Greer was hit by a pitch and Junior Tanner Nelson reached first on a bunt. Drew Ellis reached 1st on a fielders choice and then reached 2nd on a throwing error and Greer scored on the same error. Mason Ellis reached 1st on a walk and he and Drew advanced to 2nd and 3rd on a wild pitch. Gerlach reached 1st on an error and scored Drew (unearned). Klein singled to right field and drove in Mason and Gage for 2 RBIs.

That would be all the runs the Cats would need as Hunter Dye pitched a masterful game pitching 6.2 innings facing 33 batters, allowing 3 hits, 3 strikeouts, 5 walks, and 0 runs scored. Junior Cole Diffenbaugh came in for the last out and forced a fly ball to left field which Drew Ellis caught to end the game.

"It's pretty awesome! I don't know exactly how to describe how I feel, but the kids played great, they do everything I ask them to do and find ways to win." said Coach Nelson after the game.

Due to weather, the 4A State Tournament has been postponed until Sunday where Mulvane will face the winner of Tonganoxie and Nickerson.

Here is a link to the complete game stats:
http://mulvanesports.com/baseball/docs/mulvane_vs_trinity_state_2019.pdf

Here is a link to the photo gallery:
http://mulvanesports.com/baseball/viewGallery.cfm?GalID=198&season=2019