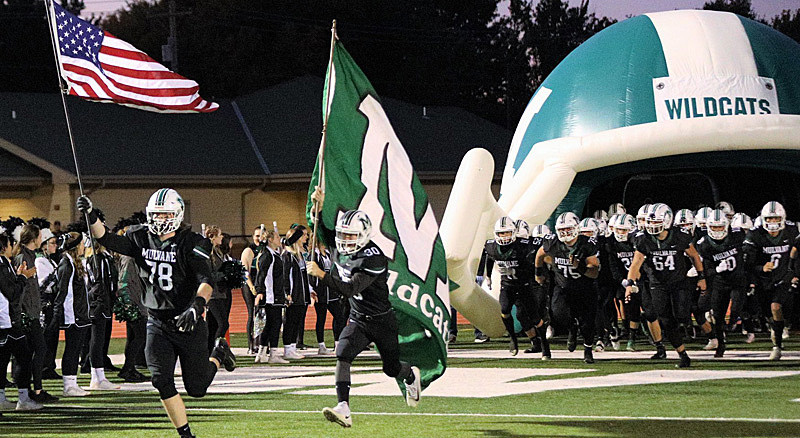 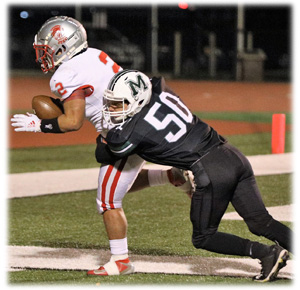 Coach Daniel Myears and the Mulvane Football team has finished out the regular season, and in fine fashion as they have won the last 4 games, outscoring their opponents 139 to 39, and enter the 4A State Playoffs as the number 6 seed in the West bracket.

Mulvane hosted the Wellington Crusaders last Friday in an AVCTL Division 4 League matchup and senior night, and the Wildcats came away with a 23-7 victory. The first quarter was a battle of the defenses as the Wildcats defense forced two punts and a turnover on downs. The Crusaders forced a fumble which they recovered and forced a punt.

Defensive Coordinator Steve Nelson's defense struck gold first as a botched snap on a punt was recovered by senior Koen Schanz in the end zone at the 7:03 mark in the second quarter. Senior Tyler Lanzrath hit the punter before he had a chance to pick up the fumble and Schanz jumped on the ball for the touchdown. Freshman Chase Dieker's PAT kick was good. 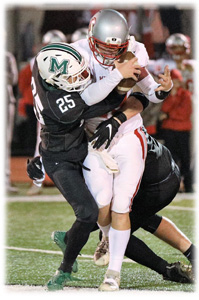 The Wildcats offense added some points on the board when senior Cole Diffenbaugh broke free for a 31 yard TD run at the 5:22 mark of the second quarter (Dieker kick good). Mulvane would go into halftime with a 14-0 lead.

The third quarter was another battle of the defenses as Mulvane forced a punt and senior CJ Johnson forced and recovered a fumble after a completed by by the Crusaders. The Wildcats punted twice in the third quarter.

The Wildcats special teams and defense struck again in the fourth quarter as junior Tanner Claar punted the ball from Mulvane's own 31 yard line to try and pin the Crusaders deep in their territory. The ball was about to bounce in the end zone then Tyler Lanzrath made a great diving play to knock the ball back into play, and the Cats would down the ball at the 7 yard line. The very next play, the Crusaders snapped the ball over the quarterbacks head and Koen Schanz tackled the QB in the end zone for a safety at the 3:36 mark. 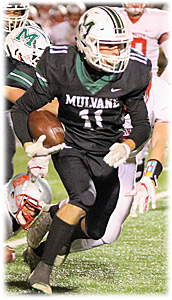 After the post-safety kickoff, the Wildcats scored again as Cole Diffenbaugh broke loose again for a 51 yard TD run at the 3:19 mark and senior Julian Whetzel tacked on the PAT. Wellington would score a last minute touchdown but the Wildcats held on for the 23-7 victory.

Diffenbaugh led the Cats in rushing with 150 yards on 16 attempts and 2 touchdowns. Sophomore Mason Ellis finished the game with 5 completions in 5 attempts for 46 yards. Mason saw limited time after he came down hard on his shoulder on a trick play. Sophomore Hunter Seier finished with 3 completions for 38 yards receiving.

Before the game, the fall sports seniors and their parents were recognized in the senior recognition ceremony. The football seniors are:

Mulvane will face Independence (2-6) next Friday for the first round of 4A State Playoffs at Lyle Couch Stadium.