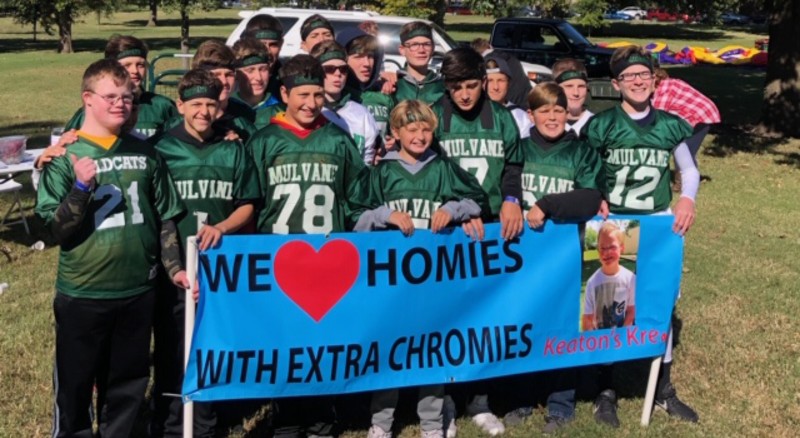 Saturday, October 12, 2019, Mulvane Middle School students and members of the 7th and 8th grade football teams participated in the 2019 Down Syndrome Awareness Day of Giving - Parade of Stars in Wichita’s Riverside Park, formerly known as The Buddy Walk.

7th grader, Keaton Palmer, adores his brother’s teammates on the 7th grade football team almost as much as he loves his Mulvane football jersey.

He can be seen at every game supporting his twin brother Kaden and the rest of the team with his number 21 jersey on. After the game he gets to congratulate his football buddies, high five them, hug them, and just be a part of the team, he’s always there for them.

But on Saturday, the team was there for Keaton, his crew. The players, friends, family, and neighbors teamed up to be a part of “Keaton’s Krew”, green jerseys and all.

“He was in heaven.” Said Andrea Palmer, Keaton and Kaden’s mom. “He was so excited and it was neat to see the sea of green everywhere because there were lots of people from Mulvane, not just the team, it was nice to see all the support from Mulvane.”

Keaton’s Krew participated in a one mile walk, games, prizes, inflatable obstacle course, music and fun for all. It was the least they could do, because they know Keaton would do anything for them.

October is Down Syndrome Awareness month, and the 2019 Down Syndrome Awareness Day of Giving - Parade of Stars is the largest fundraising event presented by the Down Syndrome Society of Wichita. But their reach is far more greater than just Wichita, as listed on their website, they cover the entire lower third of Kansas with their efforts to serve individuals with down syndrome and their families.

You can be a part of Keaton’s Krew by donating today.